My Musings on a Rainbow Life 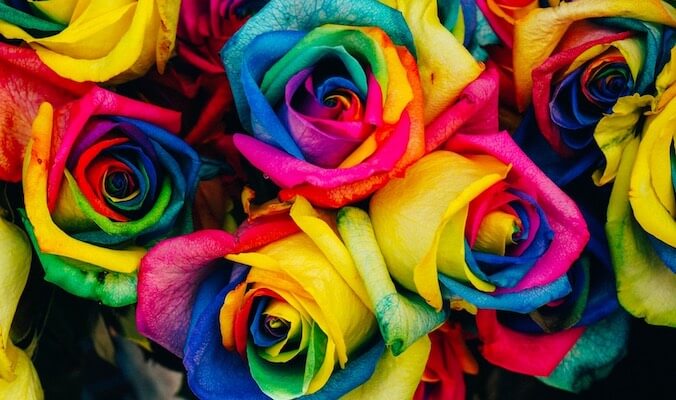 I like to think of a Rainbow Life as being one fully accepted with its many facets.

Leading a rainbow life one understands that life is made up of dualities – ‘right or wrong’, ‘joy and pain’ – which can seem like turmoil. But also that there is something beyond and beneath all that.

It means to be fully present in life, at the same time as not losing myself in it. Expressing my highest form of being. Whatever the situation I find myself in, there is a sense of peace also in the face of the full, and sometimes overwhelming, spectrum of life experiences. And, a Rainbow Life is about learning from experiences. No matter how tough, based on observation rather than judgment.

A rainbow is a phenomenon caused by the reflection, refraction and dispersion of light in water droplets. The resulting spectrum of light appears as a multicolored arc in the sky – a rainbow. Actually, the colors of a rainbow don’t represent a spectrum, as such. As the colors are less saturated and there is a spectral smearing – a kind of bleeding of one color into the other. It’s a bit the same in life, it’s often a thin line. Take between joy and sadness, laughter and tears… We can be so happy we cry. We can be so sad that it brings out a sense of pleasure – in a form of relief in us as we embrace the full experience of that.

A rainbow always appears directly opposite the sun. But it is also true that each rainbow is different and depends on the observer. It doesn’t have a fixed position as such! Not only is each observer’s set of eyes different, but each rainbow seen depends on the position of the observer. Each observer sees a unique set of light from illuminated droplets. To me, this links to how our belief system informs the way that we view the world and how we experience our lives to be – in other words what is ‘happening to us’.

I see the rainbow as a beautiful metaphor of our lives.
Because, are we not, too, simply droplets illuminated by the sun (source)?
Is it not so that this ‘person’, ‘I’, am but an optical illusion?
When in truth, what we are, is oneness:
The sun, the sky, the drop and the ocean combined;
The rainbow and the one seeing the rainbow. 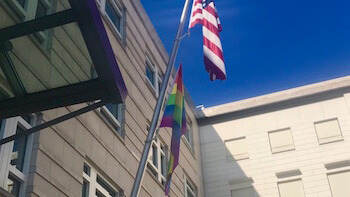 The rainbow flag, as a symbol for the LGBTQ movement, signifies the acceptance and inclusion of all people, no matter their sexual orientation. Recently, an article in the German newspaper Der Tagesspiegel brought to my attention a controversy linked to this flag. The US ambassador at the US embassy in Berlin is openly gay and had the rainbow flag adorn the Embassy’s façade. Hanging next to the entrance and the American flag, the phrase “Our message is love” printed on it.

Perhaps more than ever before, this is a political statement. The US foreign minister has banned this kind of parading of the ‘pride flag’. But luckily, the US ambassador in Berlin is not alone in his creative protest. Several embassies, including in South Korea, India, Chile and Austria, have shown rainbow colors despite the ban.

“Our message is love”, such a great motto for life – a Rainbow Life.

To me, the key to leading a Rainbow Life is to give oneself permission to step beyond one’s limited and limiting conditioning and understanding of reality. From limited to expansive, I walk along, in gratitude and with love for myself, my family, my friends, all of humanity, the planet as a whole, all beings on the planet and beyond…

This week's column is all about learning to live with more ease by brining awareness to the main blockages our own mind tends to impose on us. END_OF_DOCUMENT_TOKEN_TO_BE_REPLACED

Have you ever wondered whether Astrology has something to do with what we are experiencing in the world right now? Pluto Retrograde is calling on us. END_OF_DOCUMENT_TOKEN_TO_BE_REPLACED

As the outside world is forcing you to stay inside, you might be interested to learn how to create your own little retreat in your own home. END_OF_DOCUMENT_TOKEN_TO_BE_REPLACED

May 29, 2020 12:04 pmEstablishing personal boundaries is vital for your mental health and your self-esteem. Learn about the benefits of… https://t.co/UgZKN8O7YK
May 28, 2020 10:29 amThis week's #FoodForYourSoul column is all about learning to live with more ease by brining awareness to the main b… https://t.co/njvlVF0qns
May 27, 2020 09:37 amRT @princessmaurer: Health and Wellbeing While Pregnant @JustBreatheMag #health #pregnancy #pregnancyhealth #pregnant #healthypregnancy ht…
May 22, 2020 09:52 amThis article offers lots of #tips and #tricks for soon-to-be moms to boost their health and wellbeing while pregnan… https://t.co/dfr97a5bOM
May 20, 2020 09:01 amThis article by Maxim Kazimirsky, Head of International Sales @alfa_med_llc, offers some insights into the building… https://t.co/JhFyNJPONh