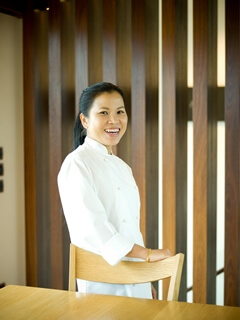 Owner and chef of the Split Apple Retreat

Anne Pen Lee was born in Thailand and by age 5 was assisting her aunt in cooking both Thai and Chinese food. Always maintaining a keen interest in cooking, Pen moved to New Zealand in 1994.

She had her formal culinary training in Auckland at Auckland University of Technology, where she excelled, and learned food presentation at the award-winning Hopgood's Restaurant in Nelson, New Zealand. Being married to a doctor whose main area of interest is nutritional medicine, Pen learned how to substitute ingredients that make a positive contribution to health and wellness for ingredients that are less salubrious, and has now perfected a gourmet spa cuisine blending natural flavours and ingredients together into mouth watering melanges. Together with Lee, her physician husband, she has written The Split Apple Thoughtful Food Cookbook, a gorgeous compendium of fast, easy to make, healthy gourmet culinary creations. Pen has received international acclaim for this new cuisine which she calls "thoughtful food." She is currently the owner and chef of the Split Apple Retreat, which Conde Nast just awarded the title of "Best Destination Retreat in Asia and Australia."

In order to step out of fear, we need to be consciously aware of our own truth and from there we can find a path to a life full of love. END_OF_DOCUMENT_TOKEN_TO_BE_REPLACED

Being able to pause and to look inwards will eventually help transcending the mind chatter to bring forth deep personal transformation. END_OF_DOCUMENT_TOKEN_TO_BE_REPLACED

Our minds chatter can be quite tricky and has a tendency to guide us into the wrong direction. How can we learn to not take it too seriously? END_OF_DOCUMENT_TOKEN_TO_BE_REPLACED