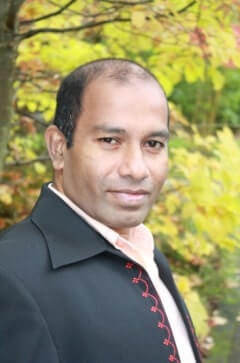 After completing a 5-year course of study at Ayurveda University in Colombo, Sri Lanka, Mr. Bandara then worked as a medical practitioner at the Ayurveda Hospital in Minariya, Sri Lanka, after which he passed the exam as doctor of Ayurvedic medicine. He then set up his own practice and, as of 1996 worked for international health resorts as Ayurvedic physician. He has been practicing in Germany since 2001, recently as the medical director of the Aruna Centre for Ayurveda in Bavaria where he passed on his broad knowledge of Ayurveda as a speaker and specialist and also as author of the book, "Ayurveda für die Seele" (Ayurveda for the soul). Since October 2010 Mr. Aruna Bandara is joining the team of Ayurvedic physicians at the Ayurveda Parkschlösschen in Traben-Trabach/Germany.

Taking a look inwards, right into the heart, allows you to get in touch with your feelings and your true self on your journey of self awakening. END_OF_DOCUMENT_TOKEN_TO_BE_REPLACED

In order to step out of fear, we need to be consciously aware of our own truth and from there we can find a path to a life full of love. END_OF_DOCUMENT_TOKEN_TO_BE_REPLACED

Being able to pause and to look inwards will eventually help transcending the mind chatter to bring forth deep personal transformation. END_OF_DOCUMENT_TOKEN_TO_BE_REPLACED