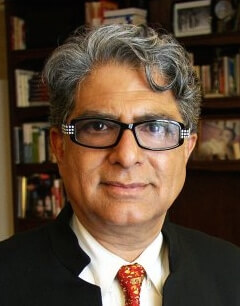 As a global leader and pioneer in the field of mind-body medicine, Chopra transforms the way the world views physical, mental, emotional, spiritual, and social wellness. Known as a prolific author of more than eighty books with twenty-two New York Times best sellers in both fiction and non-fiction, his works have been published in more than forty languages.  He serves  as an Adjunct Professor at Kellogg School of Management at Northwestern University, Adjunct Professor at Columbia Business School, Columbia University, Assistant Clinical Professor, in the Family and Preventive  Medicine Department at the University of California, San Diego, Health Sciences,Faculty at Walt Disney Imagineering and Senior Scientist with The Gallup Organization. GlobeIn acknowledges Chopra as “one of top ten most influential spiritual leaders around the world.” TIME magazine has described Dr. Chopra as “one of the top 100 heroes and icons of the century and credits him as “the poet-prophet of alternative medicine.

In order to step out of fear, we need to be consciously aware of our own truth and from there we can find a path to a life full of love. END_OF_DOCUMENT_TOKEN_TO_BE_REPLACED

Being able to pause and to look inwards will eventually help transcending the mind chatter to bring forth deep personal transformation. END_OF_DOCUMENT_TOKEN_TO_BE_REPLACED

Our minds chatter can be quite tricky and has a tendency to guide us into the wrong direction. How can we learn to not take it too seriously? END_OF_DOCUMENT_TOKEN_TO_BE_REPLACED