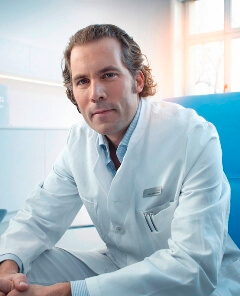 Since 2014, Dr. med Philip Catalá-Lehnen is the medical director of the LANS Medicum Hamburg, the most modern center for sports and regenerative medicine in Germany. The LANS Medicum Hamburg is the first outpatient branch of the successful Lanserhof resort. With its symbiosis of modern medicine and scientifically validated methods of naturopathy, the award winning LANS Med Concept has been providing the building blocks for a healthy, energetic and active life for over 30 years.

For many years Dr. Catalá-Lehnen practiced at the University Medical Center Hamburg-Eppendorf as specialist in orthopedics, trauma surgery and accident surgery. Today he looks after professional and recreational athletes as the chief physician for Orthopedics and Sports Medicine at the LANS Medicum Hamburg.

» Fit But Fat - a Revolutionary View on Weight-Loss

In order to step out of fear, we need to be consciously aware of our own truth and from there we can find a path to a life full of love. END_OF_DOCUMENT_TOKEN_TO_BE_REPLACED

Being able to pause and to look inwards will eventually help transcending the mind chatter to bring forth deep personal transformation. END_OF_DOCUMENT_TOKEN_TO_BE_REPLACED

Our minds chatter can be quite tricky and has a tendency to guide us into the wrong direction. How can we learn to not take it too seriously? END_OF_DOCUMENT_TOKEN_TO_BE_REPLACED