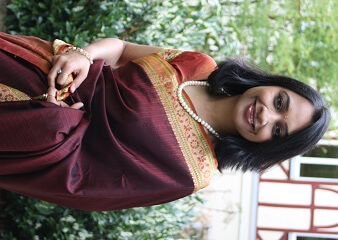 Mrs. Kansal comes from India and holds a Bachelor degree of "Ayurvedic Medicine and Surgery". After having lectured at the Mai Bhago Ayurvedic College she has worked as a traditional Ayurveda physician in India at specialized clinics and hospitals. Mrs. Kansal gave lectures about Ayurveda in Germany, Switzerland, China and India.  Since 2010 she is working at the Ayurveda Parkschlösschen as a traditional Ayurvedic doctor. She is part of the guest care staff and passes on her in-depth knowledge of Ayurveda during lectures, workshops and individual health consultations.

» Ahara – The Ayurvedic Science of Nutrition

Being able to pause and to look inwards will eventually help transcending the mind chatter to bring forth deep personal transformation. END_OF_DOCUMENT_TOKEN_TO_BE_REPLACED

Our minds chatter can be quite tricky and has a tendency to guide us into the wrong direction. How can we learn to not take it too seriously? END_OF_DOCUMENT_TOKEN_TO_BE_REPLACED

What does it mean to live your inner truth and steer through difficult phases? Claudia shows us the way by sharing a deeply personal story. END_OF_DOCUMENT_TOKEN_TO_BE_REPLACED