A Love Affair: Gemstones and Water 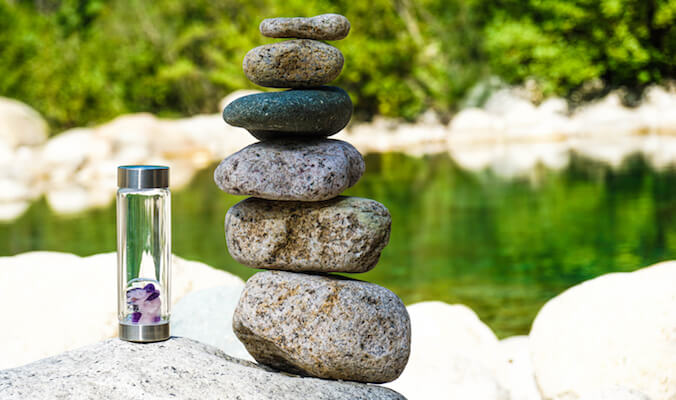 Even in ancient times, people used gems due to their healing powers.

Gemstones always had something fascinating about them and attracted humankind since the dawn of time. Diamonds, rubies and emeralds are of exceptional value around the world. But one should not forget that the reason for treasuring gems was not only because of their fascinating looks but also because of their numerous properties and healing attributes.

The wise Greek doctors of the 1st century AC as well as Hildegard von Bingen, who is considered to be the founder of scientific natural history in Germany, used them to cure their patients.

Further, countless examples in the history of civilization prove the positive effects gems have on the human organism. Today, analytical crystal healing methods are a significant component of treatment for many holistic therapeutic practitioners.

There are traces of drinking gemstone for thousands of years.

One way to utilize the power of the gems is to drink gemstone water. We all know that the human body consists mainly of water. Water is the elixir of life, our most valuable natural resource. Nothing impacts our well-being more than drinking enough good quality water.

You probably know that water is not just H2O, meaning an assembly of oxygen and hydrogen molecules. Dr. Masaru Emoto, who was a highly reputable scientist and the author of the New York Times bestseller “The Hidden Messages in Water”, discovered that water not only has a memory but that it can also be improved by external influences like gemstones.

But how does that work?

Dependent on their genesis, crystal structure and color, each type of gem has its unique kind of energetic information. The gems transfer their information to the water and, thus, improve the waters’ vitalization level. An effect, which regular water drinkers might even be able to taste and which becomes clearly visible under the microscope: Louis Pasteur, a French chemist and microbiologist from the 19th century, used to say that “we drink 90% of our illnesses”. By putting gems in the drinking water we can enhance the quality of this water. It can then reach up to a level that is comparable to fresh spring water.

There are a lot of things happening around us that we don’t understand or that we are not able to prove scientifically. However, sometimes we should just believe in what is proven by our senses.

If we are able to see, taste and feel the difference of gemstone water, shouldn’t we have the confidence to trust ourselves?

To give oneself permission to be ones true self is harder than it sounds. But if you manage to do so, the award in simply beautiful. END_OF_DOCUMENT_TOKEN_TO_BE_REPLACED

Taking a look inwards, right into the heart, allows you to get in touch with your feelings and your true self on your journey of self awakening. END_OF_DOCUMENT_TOKEN_TO_BE_REPLACED

In order to step out of fear, we need to be consciously aware of our own truth and from there we can find a path to a life full of love. END_OF_DOCUMENT_TOKEN_TO_BE_REPLACED