The Healing Power of Tea 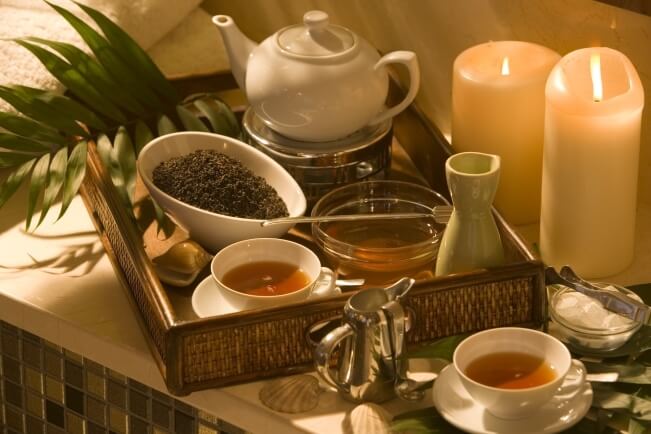 Enjoying a cup of tea gives us a chance to be still for a moment and ignore the hustle of life.

Tea calms us down, but yet energizes. It makes us cherish moments with friends and family but also in solitude, in dark hours and in happiness, in sickness and in health.

The Roots of Tea

The first cup moistens my lips and throat.
The second shatters my loneliness.
The third causes the wrongs of life to fade gently from my recollection.
The fourth purifies my soul.
The fifth lifts me to the realms of the unwinking gods.
– Chinese Mystic, Tang Dynasty

The creation of tea has very ancient roots.

Around 5000 years ago, people in China started to produce tea. Until today, China is the country with the biggest tea production on earth. Anno 552, Buddhist monks started to distribute the tea from China to Japan. It was only in 1610, that tea arrived in Europe via shippings to Amsterdam and thus became a worldwide phenomenon.

Investing time in tea means to receive something more valuable than time: be with your inner self and find happiness.

For many, tea is a lifestyle. Tea lovers will always have a special connection to tea and experience it as something that creates time rather than taking it.

Besides the effect on our mindfulness, a cup of tea has also many health benefits. The green and black tea leafs contain ingredients that help to prevent diseases and also support numerous medical therapies, such as Alzheimer, Parkinson, Multiple-Scleroses, cardio-vascular diseases, metabolism diseases, and even cancer. Tea includes a range of vitamins and minerals, such as vitamin A, vitamin B, calcium, potassium, magnesium, copper, zinc, fluoride, nickel and carotene.

Another well-known component is caffeine, which was found to be of the same chemical composition as theine. However, the caffeine of green and black tea is differently absorbed by the body. The caffeine of tea is released in the bowel while the caffeine of coffee is released in the stomach, hence the energizing effects of the tea caffeine are weakened but last longer. This is also the reason for tea calming down and stimulating while coffee induces a feeling of excitement.

Other beneficial ingredients are theobromin which is a stimulant and may has uplifting effects on emotions as well as theophyllin which has an anti-inflammatory effect, dilation of vessels and is often used for asthma bronchial.

Indulge in your teatime

There is much more to a cup of tea than many of us might have expected. Should you feel the urge to deepen your knowledge and maybe even become a tea taster you can visit the ‘TeaAcademy’ in Frankfurt, Dubai or Sri Lanka founded by the renowned tea company Ronnefeldt.

And now: Have a break – have a teatime. And let’s enjoy a cup of peace.

Being able to pause and to look inwards will eventually help transcending the mind chatter to bring forth deep personal transformation. END_OF_DOCUMENT_TOKEN_TO_BE_REPLACED

Our minds chatter can be quite tricky and has a tendency to guide us into the wrong direction. How can we learn to not take it too seriously? END_OF_DOCUMENT_TOKEN_TO_BE_REPLACED

What does it mean to live your inner truth and steer through difficult phases? Claudia shows us the way by sharing a deeply personal story. END_OF_DOCUMENT_TOKEN_TO_BE_REPLACED