How To Put a Dream Into Reality: Creating a Healing Legacy Resort 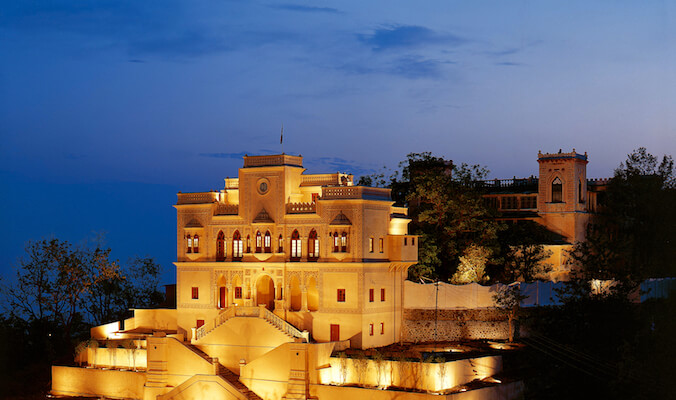 © Ananda In The Himalayas, India

When I met Ashok Khanna about 15 years ago, there was an immediate connection between us. At that time, he had just opened his resort, which later became the first Healing Legacy Resort in the World, in the foothills of the Indian Himalayas. We shared more than just a professional interest in healing. There was a common understanding about the holistic philosophy of Vedanta and the practice of Yoga and meditation.

This was before me and my partner founded the global brand Healing Hotels of the World. We visited the Ananda immediately after we met Ashok for the first time in Berlin and were overwhelmed with what we experienced there. Someone had actually built what we had been dreaming of for many years. The awe-moment was so distinctively different from the awe-some we are used to. Here was someone who had put the dream into reality and built a resort in a next to impossible place on this planet earth. And it was divine.

Mr. Khanna’s vision was a moonshot at the time he created it, because in the late 90ties meditation and Yoga was taught in alternative places.

Ashok is a descendant of the legendary Oberoi family. He was raised and trained in luxury hospitality but there was something more he wanted to achieve.

In the late sixties his grandmother sent him to an Ashram in India, which back then was a common practice for young men from the upper class in order to get acquainted with the ancient Indian spiritual tradition. That is where he met his meditation master. The time he spent there made a huge imprint and he still carries a photo of his master with him today.

His master used to say, “Life has no boundaries”.

He often talks about the teachings he heard in his youth and loves to talk about the deep meaning of life: “Act the way you like, keeping in mind that the universe is one and good and bad deeds and thoughts will rebound on to you in this lifetime.”

About the Ananda in the Himalayas

The Ananda is the first and only member of the prestigious global brand Healing Hotels of the World that has reached the „Legacy“ level, which is the highest level you can achieve.

At this Healing Legacy Resort, you are immersed into the ancient wisdom of India while experiencing the beauty of a heightened state of mind in the luxurious, beautiful and thoughtful surroundings. Mr. Khanna says: “We do not expect our guests to become hermits. This stage of Yogic practice is achieved through many years of self-sacrifice and penance. What we teach our guests at Ananda is to be a good human being by looking within and practicing what you preach. You should follow what you expect of others.“ 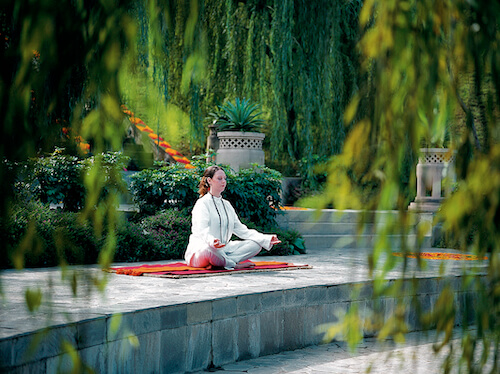 The Healing Legacy Resort is located at a height of 1000 meters above sea level. The weather is mild throughout the year, in summer as well as in winter. The monsoons are especially breathtaking (June to September) with clouds at eye level. These clouds enter your room if your window is left open. It is extremely romantic.

“If all the positive energies in this world were to come together we would be 1000 years ahead.”

At Ananda you stay at the Palace of the Maharaja of Tehri Garhwal, which was built in the early 19th century. A part of the palace is still used by the Maharaja when he is in residence. It overlooks the holy city of Rishikesh and the river Ganges which flows right through India providing water for irrigation and drinking to millions of people. It starts in Gangotri, which is in the extreme north of India and joins the sea in Bengal. The water of the Ganges river is very high in mineral content and therefore does not develop any smell or get spoilt for many years. The river Ganges is used all over India for religious purposes such as the washing of statues of gods and for prayers.

All of this contributes to an atmosphere that is truly healing. Mr. Khanna’s master said, “It is the competition that leads to destruction and hatred. Yoga can solve many of the world’s problems “

Mr. Khanna Intentions for the Ananada

“Looking within and strengthening your intellect is achieved when you are at Ananda. This is done through the practice of Yoga and by attending lectures on Vedanta every morning and evening. It is important to live in the present and to look within. This cannot be done when you are going through your daily life in the places of your work. We teach you how to accomplish this at Ananda.”

“The decor of Ananda is timeless and peaceful. Clutter is avoided at all costs as it is important for the mind to be at peace and not cluttered. A strong intellect also helps one to think clearly with an uncluttered mind.”

The staff are one of our greatest assets. “Many years of training goes into making them believe in and practice the philosophy of Ananda. They have to bite into this philosophy to be able to impart the same to the guests.”

To give oneself permission to be ones true self is harder than it sounds. But if you manage to do so, the award in simply beautiful. END_OF_DOCUMENT_TOKEN_TO_BE_REPLACED

Taking a look inwards, right into the heart, allows you to get in touch with your feelings and your true self on your journey of self awakening. END_OF_DOCUMENT_TOKEN_TO_BE_REPLACED

In order to step out of fear, we need to be consciously aware of our own truth and from there we can find a path to a life full of love. END_OF_DOCUMENT_TOKEN_TO_BE_REPLACED