Being a Little Bit Maasai 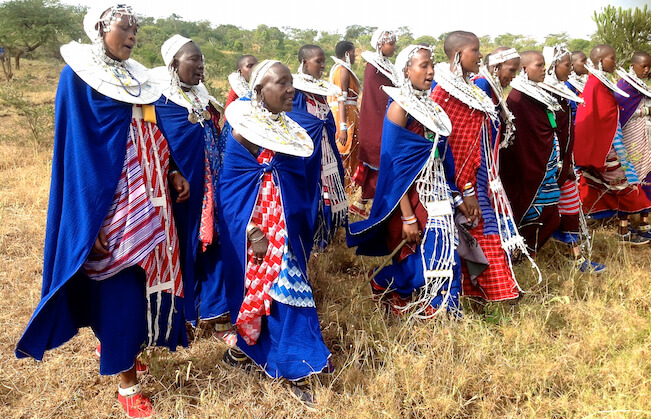 When I ‘rewound the video of my life’ and searched for an underlying plot, it made perfect sense that a girl from Connecticut, the daughter of a pharmacist, would end up in East Africa, learning from the indigenous people and sharing ideas for creating a healthier and happier world.

Up until 1999, the scenes in my life were not too unusual for a Russian-Italian woman raised in the States; I played piano and flute and participated in gymnastic competitions; my mom cooked healthy Italian food and then I developed a passion myself for cooking dishes from many cultures. I fell in love with ideas and pursued a PhD in Sociology & Social Psychology. To this day, I remain endlessly fascinated by how the global world shapes, and is shaped by individuals.

Towards the end of my graduate school career at the University of Washington in Seattle, I grew increasingly uneasy about the trajectory the society I was living in was headed. Material wealth was increasing rapidly, at least for some of the people; the pace of life had sped up so fast that people were literally scurrying around like ‘chickens without their heads’. I was hearing of more and more people being diagnosed with stress-related physical and psychological illnesses. With all the training I had received in understanding people and society, I knew I had to do something to alert people as to why their body-minds suffered.

It was at that point, I was drawn to Africa; the underlying plot of my life took a very interesting turn.

What I experienced and learned

My first visit to the continent was to Tanzania. I went as a tourist to climb Mt. Kilimanjaro – I summited in September 1999 – and go on a wildlife safari. While in conversation with my Maasai guides, I became aware that I was with people who could teach me something profound: some gems of wisdom that kept them strong, proud, peaceful, loving and humble men and women. I wanted to learn more, and went on a mission to undercover their secrets; at least those they were willing to share with me.

In 2001, I rented out my house in Seattle and moved to Arusha, Tanzania. For almost a decade, I lived and worked there, co-founding the NGO Terrawatu with Maasai elder Lekoko Ole Sululu. Together we continue to manage projects in Tanzania including classroom construction, school computer labs and medicinal plant cultivation. In exchange, the Maasai shared with me some of their secrets for maintaining balance of the mind, body and spirit. Eventually, they asked me to share what I was learning so that I could help people in ‘my tribe’.

Putting my thoughts into written words

I began work on my book Time is Cows: Timeless Wisdom of the Maasai in 2006. As much as I love to write, it was very difficult for me to share the teachings using words. While my teacher and translator Lekoko Ole Sululu did an amazing job explaining things to me, the Maasai way of life is so present, so in-the-moment, when I sat down to write about a thought or an experience, my mind went blank. This works well for Zen meditation, not for book creation!

Thankfully, as the story of my life would have it, I met Dr. Deepak Chopra and David Simon soon after. These two amazing men had found a way to share the ancient teachings of India in a way that not only maintains the integrity of the wisdom tradition, and actually amplifies the philosophy and practices to make them useful for modern folks. I decided to study (more!) and enrolled in Chopra Center University to obtain my Vedic Master certification. That expanded scene in my life has now produced a super-inspired yoga, meditation and Ayurvedic lifestyles instructor AND a beautiful book and DVD Maasai Yoga & Meditation.

Filling my mind and body with inspiration

I am so happy and grateful for how the sharing of the ancient wisdom tradition of the Maasai has been finding its way to places all over the world. People have been writing to me to follow-up with the information in the chapters on “Plant Medicine”, “Staying Clean and Clear”, “Maasai Meditation” and how they can also learn to ‘rewind the video of their life and find an underlying plot’. Together with a kindred-spirit and lodge owner in Tanzania, we have developed Healing Safaris so visitors can experience first-hand the teachings of the Maasai inside the stunning landscapes and wildlife habitats of East Africa.

Now I know one of the driving passions in my life is to weave roots of indigenous wisdom into a global blossoming consciousness. Having seen and experienced it with my own eyes, heart and soul, ‘being a little bit Maasai’ goes a long way towards nurturing peace, health and well-being in ourselves and in our communities.

To give oneself permission to be ones true self is harder than it sounds. But if you manage to do so, the award in simply beautiful. END_OF_DOCUMENT_TOKEN_TO_BE_REPLACED

Taking a look inwards, right into the heart, allows you to get in touch with your feelings and your true self on your journey of self awakening. END_OF_DOCUMENT_TOKEN_TO_BE_REPLACED

In order to step out of fear, we need to be consciously aware of our own truth and from there we can find a path to a life full of love. END_OF_DOCUMENT_TOKEN_TO_BE_REPLACED