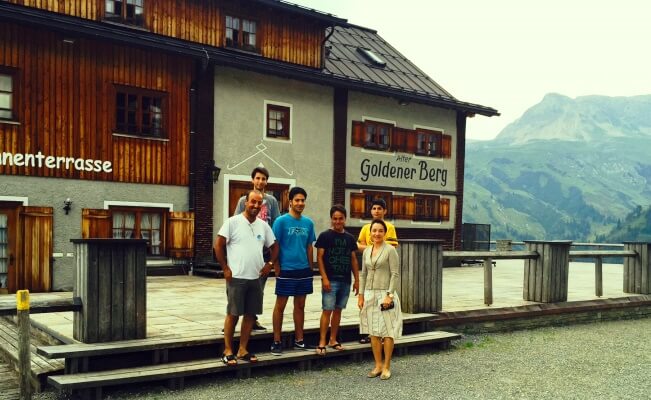 To most people the refugee topic is just an abstract piece of information they swallow in the evening with their dinner while watching the news. To me it’s a very lively part of my reality. Despite the fact that it is simply just sad and often incomprehensible what these people partly have been through, it is one of the most fulfilling experiences of my life so far.

I eventually found out that the Caritas is in charge of accommodating refugees coming to Austria. So I turned to them and got a positive feedback right away. To my own surprise I was foiled by my dad who wasn’t willing to give the apartment to five people in need when it came down to turn good will into action. He was too worried what the neighbors might think.

Time went by, the stream of refugees constantly grew and the whole topic had turned into a daily headliner by springtime, only rivaled by the financial crisis in Greece. Again – I knew I had to do something, or at least try.

Turning an idea into action

We welcomed them with open arms, showed them around and explained the rules we live by. We are fortunate enough to have a wonderful morning waiter from Egypt, Ehab, who speaks Arabic; he therefore made it possible to communicate quite easily with our new arrivals, as they didn’t speak any other languages. Almost instantly after the first meeting I felt this happiness inside that one has when doing the right thing.

From day 1 we always ate togehter, and took them everywhere with us. We organized a clothing collection in our village and bought cosmetic items like soap etc. for our new friends to provide them with the most necessary things for a new start. From day one we always ate together at the hotel. When we do something with our employees we take our Syrians along; when they finished Ramadan we surprised them with a big cake, as that date is as special for Muslims as Christmas is for Christians.

Contrary to popular belief there never were any problems with hosting refugees – I cannot stress this enough! Neither religious, cultural nor any other issues came up or made things difficult. It is quite the opposite actually: those seven men are extraordinary polite, very friendly and most thankful.

Unfortunately we can only host them until the end of November 2015 as winter season starts and we will need the rooms once again. They won’t be homeless though, we won’t show them the door of course. One of our guests will rent small apartments in Vienna, is about to organize a language course and has also offered to help searching for jobs as soon as our Syrians get their papers. So I am very positive that I will put “my” men in good, trustful hands. They will get lots of support during their first steps into the Austrian working circle.

Being in the hotel business I have been working and living with foreigners most of my life. I suppose the majority of people that are not tolerating refugees in their hometown are driven by the fear of something or someone they don’t know.

‘No deed is too small’

After my personal experiences all I can say is: let’s reach out and help. Not only for the sake of refugees, but also for ours. We all can do something, no deed is too small. It has only been seven men I could help a little.

Seven out of 60 million people worldwide fleeing their homes at the moment. But it certainly felt right and there is no question I will continue like that. Just keep in mind: at one point in your family history, your people had to flee their home as well; so let’s just treat others like we would hope to be treated ourselves and help those in need today.

Editor’s note: Two other young men from Syria, cousins aged 22 and 24 that Daniela accommodated for some time, have found an apprenticeship in the small village of Lech. The duo that had studied economics before they were forced to flee war and terror, will soon start to train for a career as chefs in two exquisite hotels. Originally they wanted to stay at Hotel Goldener Berg and work with Daniela and the team that has welcomed and accommodated them warmly, but since there were no vacancies, Daniela successfully cast her net wide. At the moment it all depends on the ‘okay’ from the government, as both don’t have their papers yet. But it looks like two more ‘boys’ are well taken care of.

To give oneself permission to be ones true self is harder than it sounds. But if you manage to do so, the award in simply beautiful. END_OF_DOCUMENT_TOKEN_TO_BE_REPLACED

Taking a look inwards, right into the heart, allows you to get in touch with your feelings and your true self on your journey of self awakening. END_OF_DOCUMENT_TOKEN_TO_BE_REPLACED

In order to step out of fear, we need to be consciously aware of our own truth and from there we can find a path to a life full of love. END_OF_DOCUMENT_TOKEN_TO_BE_REPLACED