Not for Sale – Counter Human Trafficking 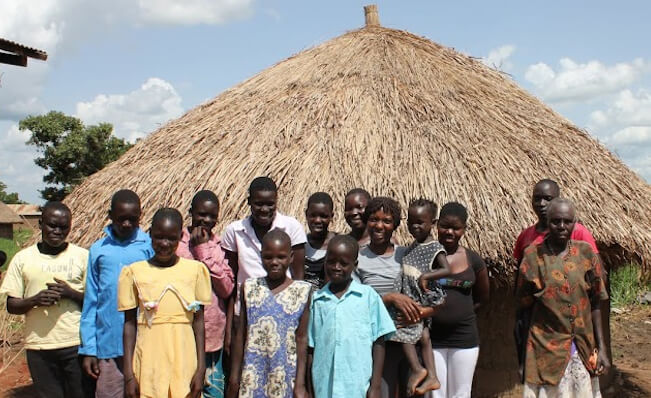 This is the story of a remarkable woman, who grew up during Uganda’s civil war, survived the atrocities of the Lord’s Resistance Army, and later made it her mission to counter human trafficking, training law enforcement, and rehabilitating victims of war in Uganda:

When I was born

My birth was rather miraculous. My parents lived in a rural village in Pallisa district in Uganda. Then one night, my father had to risk riding a bicycle through a forest, inhabited by wild animals while my mother (in labor pains) held a lit lamp on her laps so my father could navigate the narrow path to rush her to hospital. Several times they had to stop when my mum’s labor pains got worse – it was a miracle they made it to a local hospital alive.

If the marriage failed, a man has a right to demand for a dowry/bride price.

My parents were happy to have a healthy baby, irrespective of the sex. But many in my village didn’t celebrate including my paternal aunt who broke the ‘bad’ news and mourned a birth of yet another girl child. I was the third daughter in a row for my mother. There is a general preference for boys than girls, who are considered worthless, not worth educating, don’t carry the family name nor inherit land, and are only good for marriage.

This is something I witnessed one evening when my aunt’s husband arrived to my grandfather’s home with armed guards. He was no longer interested in being married to my aunt, with whom he had 9 children and several grandchildren. He drove away more of my grandfather’s cattle than the amount he paid as bride price, claiming the cattle must have multiplied since he married my aunt several years ago. Because of this practice, it was very common for women to endure domestic violence, especially if their parents could no longer pay back the dowry in case the marriage failed.

People called me names including ‘prostitute’ even before I knew what the word meant.

That’s when I made my mum a promise that I was going to work hard to succeed in life; I wanted to embarrass those big men and boys alike who called me such bad names! Education therefore would be my only escape. Living in such an environment motivated me to study even harder, enduring walking long distances and teasing at school. Thankfully, my parents prioritized education for all their children irrespective of the sex (six girls and two boys).

As a family, we have survived 3 wars, the 1985 coup that toppled President Apollo Milton Obote, where our home was a front line, with a machine gun stationed at our gate, then in 1986, the National Resistance Army came to the city and we had to flee our home and retreat to the village, only to encounter the rebel group the Lord’s Resistance Army (LRA). The LRA specifically targeted us girls because we were virgins; we kept fleeing through bushes including living in an internally displaced camp at a catholic mission.

I believe what kept us together as a family amidst those challenges is the love we have for one another.

My family kept together and supported one another. Our parents were our heroes, always taking good care of us and improvising even in the most difficult situations. I recall as kids we used to go deep into the forest in search for fish; those which birds have accidentally dropped trying to feed their young ones. That’s how we got our proteins.

My interest in countering human trafficking comes from my childhood experiences of fleeing and surviving the LRA. After completing my undergraduate degree from Makerere University in 1995, the only Ugandan University then, I joined the immigration service.

I caused the arrest of one of the commanders of the LRA who had killed people, cooked and fed villagers on boiled human flesh.

Then I rescued girls the Lord’s Resistance Army had taken captive as sex slaves, some of whom had children fathered by the LRA commanders including rebel leader Joseph Kony. These experiences led me to pursue a master degree. I carried out research on the role of the family in the rehabilitation and reintegration of children who have survived abduction by the LRA. Working at immigration control, I witnessed the devastating effects of human trafficking and listening to survivor stories was very devastating.

In 2010, I successfully competed for the prestigious Hubert H. Humphrey Fellowship, specializing in Human Trafficking Policy and Prevention, with the University of Minnesota, as my host University. During my fellowship year, I decided to apply and make a commitment of action at the Clinton Global Initiative University (CGI U) to counter human trafficking, build a rehabilitation center for survivors of human trafficking, train law enforcement and create awareness about human trafficking.

Promoting education is a key component of my CGI commitment and to date, with the support of partners like Books For Africa and Sir Emeka Offor Foundation, I have been able to deliver over 69,000 books for the education of vulnerable children including victims of human trafficking. I wouldn’t be where I am without an education

I also work with women who have survived the Lord’s Resistance Army conflict in Northern Uganda. Having been displaced at an earlier age, I know what it means to be homeless. So working with 22 displaced women, we started the Huts for Peace Program; women build their own housing (huts) using locally available materials.

Building a sanctuary for victims

One of the biggest challenges in Uganda is the lack of shelters to provide support to survivors repatriated following their trafficking abroad. In 2013, the Trafficking in Persons Office registered a total number of 837 victims of trafficking; 429 of who were victims of transnational trafficking, including 322 females. My current mission is to establish/build a rehabilitation center for survivors – The Dream Revival Center (DRC).

This center will provide comprehensive care to survivors, encompassing the physical, psychological, health and social services. The center will offer shelter in which repatriated female survivors of human trafficking can temporarily stay; they can access support services, rebuild their confidence and emotional wellbeing and revive their dreams.

I am passionate about women empowerment.

In 2003, I was selected as one of 50 emerging Global women leaders by the Women In Public Service Project, which was launched by Secretary Clinton in 2001. In March 2014, I was hosting WPSP institute in Uganda to train women leaders as part of the agenda to achieve 50×50 Women in Public Service by the year 2050.

To give oneself permission to be ones true self is harder than it sounds. But if you manage to do so, the award in simply beautiful. END_OF_DOCUMENT_TOKEN_TO_BE_REPLACED

Taking a look inwards, right into the heart, allows you to get in touch with your feelings and your true self on your journey of self awakening. END_OF_DOCUMENT_TOKEN_TO_BE_REPLACED

In order to step out of fear, we need to be consciously aware of our own truth and from there we can find a path to a life full of love. END_OF_DOCUMENT_TOKEN_TO_BE_REPLACED