16 Reasons Why Laughter is Good for You 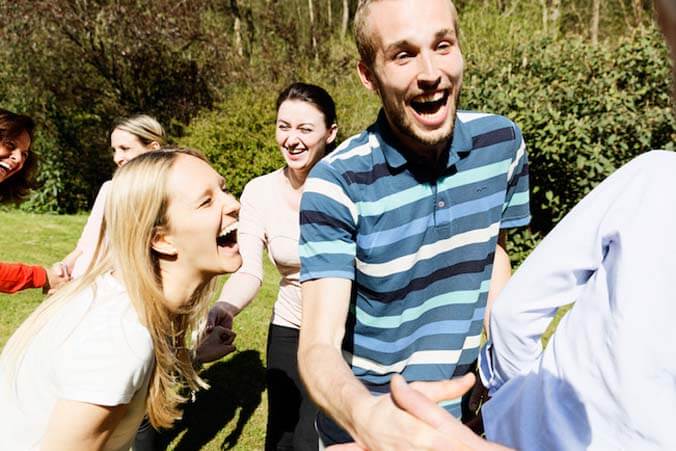 Laughing is not only fun, but has a vital impact on your overall health, providing additional zest for life and boosting life energy. Based on ancient yoga knowledge and modern laughter research, Laughter Yoga is a mixture of laughter exercises and deep yoga breathing.

In 1964, science writer Norman Cousin described the therapeutic effects of laughter. His laughter therapy enabled him to ease his pain and overcome his illness (spondylarthritis). “A smile that you send out, will come back to you.” – Indian saying

In the 60s, laughter research or “gelotology” (from the Greek word Gelos = laughter) was substantiated and various studies were carried out regarding the therapeutic effects of laughter.

In 1995, the Indian orthodox medical practitioner Dr. Madan Kataria and his wife Madhuri, a yoga instructor, founded the actual practice of Laughter Yoga. They combined yoga breathing exercises with intentional, unprovoked laughing. Today, Laughter Yoga can be found in more than 6000 laughter clubs and in approx. 65 countries.

16 Reasons why Laughter is Healthy

When attending a Laughter Yoga class you do various mimed laughter and yoga-breathing exercises in a group. You may and should laugh artificially, as according to scientific findings, the body cannot distinguish between fake and real laughter. As everyone knows – laughter is the best medicine.

You will benefit from the numerous physical and spiritual effects the laughter has on your system and often, the feigned laughter turns out to provoke quite real infectious laughter.

Because of those fundamental effects on one’s health, Laughter Yoga is an integral part of the holistic health programs at the Ayurveda Parkschlösschen. And: the guests just love it!

Being able to pause and to look inwards will eventually help transcending the mind chatter to bring forth deep personal transformation. END_OF_DOCUMENT_TOKEN_TO_BE_REPLACED

Our minds chatter can be quite tricky and has a tendency to guide us into the wrong direction. How can we learn to not take it too seriously? END_OF_DOCUMENT_TOKEN_TO_BE_REPLACED

What does it mean to live your inner truth and steer through difficult phases? Claudia shows us the way by sharing a deeply personal story. END_OF_DOCUMENT_TOKEN_TO_BE_REPLACED