The Secret Power of Yoga Mudras 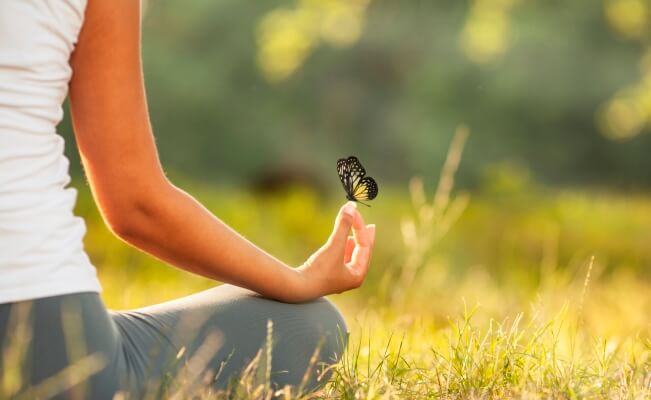 Ever looked at the hand of Buddha on a statue? The chance is pretty big that he has two fingers connected. This hand position is called mudra. According to the yogis yoga mudras restore health: physically and mentally.

In Sanskrit mudra means closure, gesture, attitude or seal. Yoga mudras are psychic, emotional, devotional and aesthetic gestures, seals or attitudes. According to the yogis, connecting two fingers can influence the energy flow within the body; linking individual force with universal or cosmic force, but also making a ‘short-cut’.

These short-cuts play a vital role in restoring health. Our physical body is consists of five elements: air, water, fire, earth and ether (the spaces between cells). Each finger represents an element:

When one of your fingers is connected with your thumb, the element of that finger will be brought back into balance, as the fingers are essentially electrical circuits. By connecting them you create an electromagnetic current within the body, which balances the elements and restores health.

Our fingers form the end of ten of our nadis (energy lines in our body; also called meridians in acupuncture). Normally prana (energy) leaves our body through the fingertips. By linking two fingers we send the energy back into the body. By doing so we are able to influence the elements.

Yogis believe that mudras can also change spiritual and mental aspects of a person; mood, attitude and perception.Connecting two or more fingers is not the only way to perform mudras; you can involve the whole body in a combination of asana, pranayama, bandha and visualization techniques. Yogis see them as higher practices which lead to awakening of prana, chakra and kundalini energy.

There are five groups of yoga mudras

This article was originally published on dutchsmilingyogi.com

To give oneself permission to be ones true self is harder than it sounds. But if you manage to do so, the award in simply beautiful. END_OF_DOCUMENT_TOKEN_TO_BE_REPLACED

Taking a look inwards, right into the heart, allows you to get in touch with your feelings and your true self on your journey of self awakening. END_OF_DOCUMENT_TOKEN_TO_BE_REPLACED

In order to step out of fear, we need to be consciously aware of our own truth and from there we can find a path to a life full of love. END_OF_DOCUMENT_TOKEN_TO_BE_REPLACED