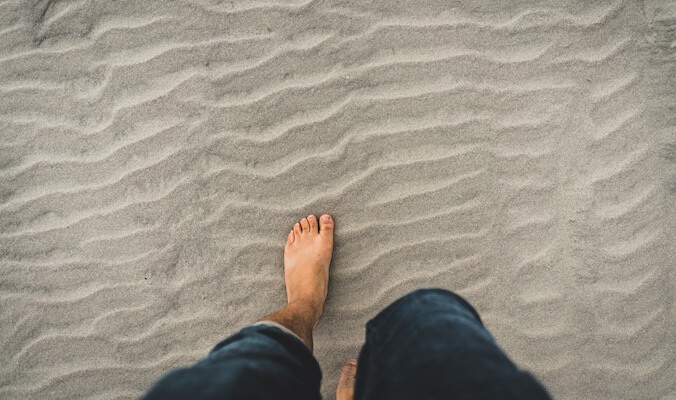 “You don’t know what you got till it’s gone”. That was a lyric to a popular hit song on the radio I heard when I was growing up in New York. But as a teenager, all it was was a singable line from a Joni Mitchell song that really didn’t have much impact on me until that “it” was gone, later in life, when I was diagnosed with Multiple Sclerosis.

Fast forward some 20 years later when, after a series of puzzling odd symptoms, my doctor rather matter-of-factually confirmed earlier suspicions. I had relapsing-remitting Multiple Sclerosis (MS). All I knew was that anything with the word “multiple” in it was not likely anything I wanted as part of my daily lexicon. Much less my daily existence. Initially, the words rang hollow, but then continued to reverberate through my soul. Much the way one yells into a canyon; “Is anybody there… there, there?” Can anybody hear me… me, me?”

This MS thing? There was no finish line, no medal, and certainly not people along the route yelling my name and cheering me on.

Having just completed a 26.2 mile marathon, I had never been in better shape in my life; physically, psychologically, and emotionally. Little did I realize that while one marathon was in the rear view mirror, the other was just beginning and hearing the gun go off at the starting line. At the conclusion of the first marathon (the running one), at least I got a medal around my neck, some bragging rights, a great photo crossing the finish line, and one more check mark on my life’s to-do list.

Relapsing-remitting Multiple Sclerosis. The beat of a different drum continued to bounce around my head.  Was my life now over? Or, just life as I had known it for the past 24 years? I was totally dumbfounded by this unwelcome and unanticipated news in my life. How could anything be wrong with me? But it was, and IS. I was now a member of a special fraternity I never asked to be a part of.

24 1/2 years have passed since that day. For me, I have bought into the mantra that “MS is NOT life threatening, but life ALTERING”. And those words could not be more true.

I have grown immensely in ways that I could never have anticipated.

For the past 3 decades, I have experienced more than my share of potholes and hiccups. I certainly asked myself “why?”, and “what’s the point of any of this thing called life?”

I have thought about death, but seem to have made a conscious choice to live. I enjoy whatever time I am lucky enough to spend here; at this computer, sipping a fine, hearty red wine, breathing the fresh mountain air or hearing the surf crash on to the rocks at the shoreline. I have taken more than my share of lumps, had broken bones, fuzzy thoughts, not working limbs. You get the idea. Or maybe you don’t and never will. 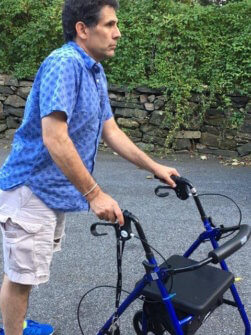 People who’ve known me forever see changes in the way I get from point A to point B. They often look at me with disbelief as if to unspeakably ask “how?“ or “why?” or proclaim “what a shame.”

Some ask ‘how are you doing?” and my usual answer is “status quo”. I remind myself that my status quo is probably better than many, with or without MS. Would I give my disease back? Certainly, in a heartbeat. But I have to pause and consider that ironically, I have been given many gifts that have made my life worthy and memorable.

Perhaps most importantly, I have been bestowed with a classic coping strategy that allows me the ability to laugh, see the glass half full (rather than half empty) and to hopefully make a difference in this world, especially in the Multiple Sclerosis universe.

I think about my ancestors, my parents, and people I have been lucky enough to know during my time here on planet earth. On a crystal clear night, I have peered into the abyss to try and wrap my head around the concept of “infinity”. It still boggles my not-so scientific mind.

But I do grasp this much; our time here is pretty limited but hopefully we can do some good, some comforting, some laughing, some crying, some mending fences and some healing along the way.

Read more about me and my cause here: rickaroundtheglobe4ms.com

To give oneself permission to be ones true self is harder than it sounds. But if you manage to do so, the award in simply beautiful. END_OF_DOCUMENT_TOKEN_TO_BE_REPLACED

Taking a look inwards, right into the heart, allows you to get in touch with your feelings and your true self on your journey of self awakening. END_OF_DOCUMENT_TOKEN_TO_BE_REPLACED

In order to step out of fear, we need to be consciously aware of our own truth and from there we can find a path to a life full of love. END_OF_DOCUMENT_TOKEN_TO_BE_REPLACED