All You Need to Know About Tai Chi Practice 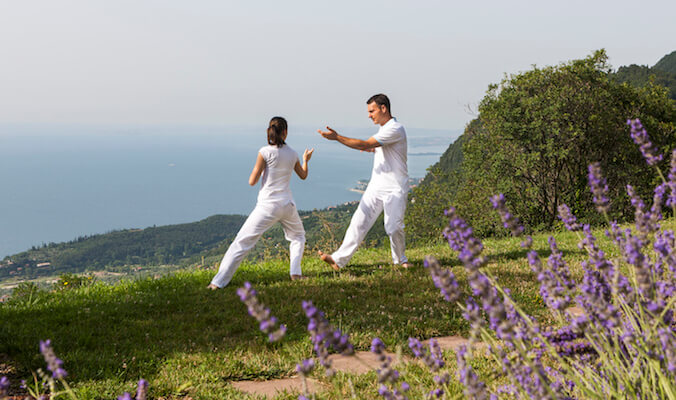 Loosely translated as “Supreme Ultimate Boxing”. But from its gentle movements, most people would assume that Tai Chi or Tai Chi Chuan is anything but lethal. This popular Chinese internal martial arts discipline emphasizes deep breathing and relaxation. It entails slow, repetitive movements different from muscle contractions found in ‘hard’ martial arts disciplines.

But even if it doesn’t appear as aggressive, Tai Chi offers powerful self-defense techniques. Besides this, people often call it also a ‘healing’ martial arts that, when practiced regularly, comes with an abundance of benefits.

THE HISTORY OF TAI CHI

Though its exact history is unknown, the origin of Tai Chi dates back to the 12th or 13th century in China. The original purpose was a self-defense discipline that simultaneously promotes inner peace. It also has a close connection with Qigong, an ancient Chinese martial arts, that has roots in Traditional Chinese Medicine.

Fast forward to today, it remains one of the most popular martial arts styles in China. Usually, people perform in groups, in the morning in parks and open spaces, over the past decades. Its practice has steadily increased outside of its country of origin – including in western countries such as the U.S.

THE PHILOSOPHY BEHIND TAI CHI

Keeping the balance of the Yin and Yang. Yin and Yang, the opposing elements that make up the universe, need to be in harmony. A belief says that Yin has the qualities of water such as stillness, inward and downward directions and is feminine in character.

In contrast, Yang tends to be masculine and has qualities of fire, such as heat, and includes upward and downward movements. In Taoism, it is believed that in order for one to be healthy, their Yin and Yang needs to be in balance. This can be achieved through the practice of Tai Chi.

The differences between the five main styles lie in the speed of the movements and the way the body holds postures. Although they are different, these five Tai Chi styles are similar and connected to each other. Hence, it is common for Tai Chi practitioners to combine two or more styles.

WHO SHOULD PRACTICE TAI CHI?

This low impact, ‘soft’ martial arts style is very practical as it requires no equipment and can be done just about anywhere.

As it doesn’t put much pressure on bones and joints, the elderly also practice it to stay physically active. Since it offers a range of health benefits, hospitals and rehabilitation centers offer it to those who are recovering from illness or functional limitations.

That said, Tai Chi practice is also highly beneficial for people of all ages who are still in good health and seeking to maintain their health and fitness. Additionally, it is recommended for those who wish to learn powerful self-defense moves in a non-strenuous (you are encouraged to learn at your own pace). But also prefer to learn it in a safe way (minimal risk of injury).

Tai Chi may also complement existing martial arts practice as it allows you to relax, regenerate and increase focus. It emphasizes the use of internal energy and slow yet powerful movements. It also enables those who master it to deflect their attacker effortlessly. Tai Chi movements often ‘fool’ people due to their subtlety. But as a warning, when performed correctly, they are certainly lethal enough to neutralize opponents without the need of exerting much energy.

In addition to balancing the Yin and Yang, Tai Chi also encourages the proper flow Qi or ‘Chi’. This is an energy force that flows through the body. This energy force has been proven to have numerous health and fitness related benefits including:

Are the health benefits of Tai Chi practice that we listed above not enough to convince you to start practicing Tai Chi? Here are other great reasons that may just help change your mind:

How to Get Started

Though Tai Chi is one of the safest forms of martial arts and physical exercise. It is best to consult with your doctor before starting your practice. It may not be suitable for those who have musculoskeletal limitations, or if you are taking medications that tend to make you lightheaded.

Once you have the approval of your physician, you can begin through the following ways:

Want to become as strong as oak, flexible as a willow and clear as still water? Head on over to BookMartialArts.com for a vast selection of powerful Tai Chi programs and other popular martial arts training camps!

Being able to pause and to look inwards will eventually help transcending the mind chatter to bring forth deep personal transformation. END_OF_DOCUMENT_TOKEN_TO_BE_REPLACED

Our minds chatter can be quite tricky and has a tendency to guide us into the wrong direction. How can we learn to not take it too seriously? END_OF_DOCUMENT_TOKEN_TO_BE_REPLACED

What does it mean to live your inner truth and steer through difficult phases? Claudia shows us the way by sharing a deeply personal story. END_OF_DOCUMENT_TOKEN_TO_BE_REPLACED