Thermal Water as a Healer

Who has not experienced muscular pain and found that a warm bath eases the strain? If you would like to take this idea one step further, rehabilitation in thermal water proofs to be a natural and very effective pain remedy as it benefits from the therapeutic qualities of the thermal water. The composition of microorganisms contained in the sulfurous water, rich in bromine and iodine salts, is what adds to the rehabilitative advantage.

With its antiseptic effect, it prevents the growth of disease. The anti-inflammatory effect reduces swelling, tenderness and pain. And last but not least, its soothing quality helps your body, mind and soul to relax calming the pain physically as well as mentally.

Sulfur kisses your pain away 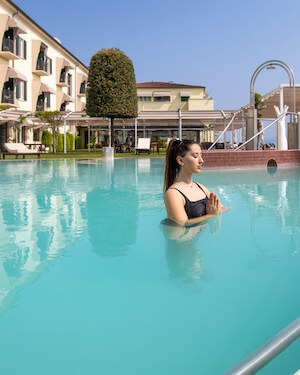 The rehabilitation practiced in the thermal pools of the Terme di Sirmione near Lake Garda in Italy offers you to experience the healing qualities of the water. Scientific research has shown the benefits of these waters. A key role in rehabilitation efforts play the high amounts of mineral salts such as iodine and bromine, as they have a sedative and antiseptic effect on the body and are absorbed through the skin. The other big star is sulfur (hydrogen sulphide, to be precise) which has a strong anti-inflammatory quality. A recent study* carried out at Terme di Sirmione focused on the microorganisms (called microbiome) contained in the thermal water. The research highlighted that it is the sulfur bacteria that is capable of producing anti-inflammatory lipids, that kiss your pain away. In short: a natural painkiller.

Moving with ease and awareness

The “magic potion” you immerse yourself is governed by very different laws from those that determine your behavior in the earth’s atmosphere. In thermal water the resistance of water reduces the impact of earths’ gravity on your body. Thus, during therapeutic treatment water literally supports the recovery of the movements you would like to regain. 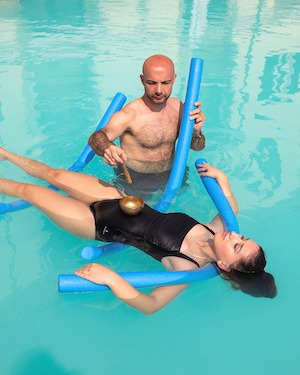 In fact, the water slowing down your movements, facilitates the un-learning of old motor patterns and learning new ones. Physiotherapy in thermal water can also be helpful to improve both neuromuscular and vascular systems’ responses. Of course, it is perfect for relaxation in general.

As the sulfurous water has a particular density and its resistance against your body allows you to slow down or accelerate the execution of movements, it stimulates the response of muscles, joints and of your body as a whole. Furthermore, an important part of the benefits of therapeutic treatments is the non-verbal communication and relationship that you establish with the physiotherapist who takes care of your floating body and guides your movements.

At Grand Hotel Terme, we combine the benefits of rehabilitation in water guided by our physiotherapists with the healing qualities of our thermal water which amplify the anti-inflammatory and muscle relaxing effects typical of water. The therapeutic treatments are carried out in the outdoor pool at Grand Hotel Terme, during winter as well as during summer since its temperature is at a constant warming 36-37°C.

* “Microbial biodiversity of thermal water and mud in an Italian thermal centre by metagenomics”published in: “Water Science and Technology”, accepted October 2017

Being able to pause and to look inwards will eventually help transcending the mind chatter to bring forth deep personal transformation. END_OF_DOCUMENT_TOKEN_TO_BE_REPLACED

Our minds chatter can be quite tricky and has a tendency to guide us into the wrong direction. How can we learn to not take it too seriously? END_OF_DOCUMENT_TOKEN_TO_BE_REPLACED

What does it mean to live your inner truth and steer through difficult phases? Claudia shows us the way by sharing a deeply personal story. END_OF_DOCUMENT_TOKEN_TO_BE_REPLACED